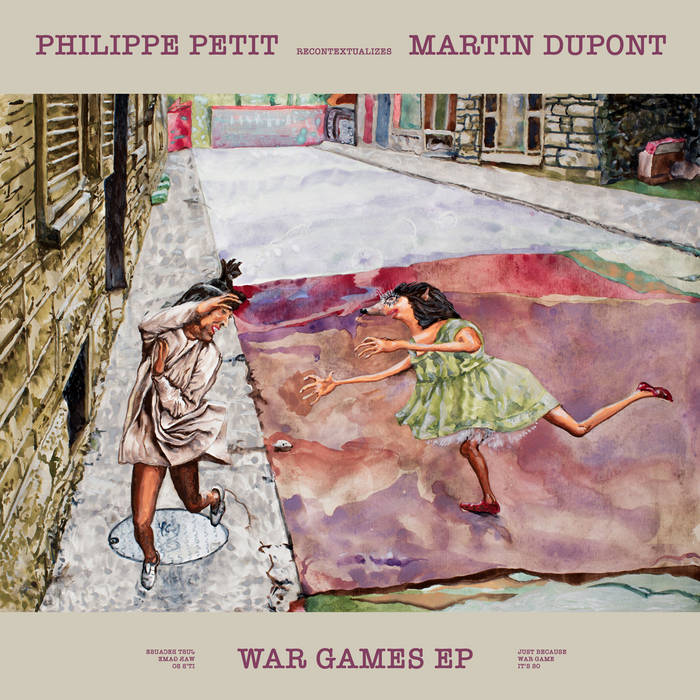 About a year ago Alain Seghir invited Philippe Petit to work on some tracks of his legendary band Martin Dupont.
Philippe was really pleased with the idea because he had been following the band since his teenage days in the early 80s and saw them live opening for The Lotus Eaters and Siouxsie… Thus Philippe selected some songs which were aging well and tried to add his spices while respecting the original material, exactly as if he’d been a member of the band…

The French group Martin Dupont emerged in 1981 in Marseille. The initial line-up was Alain Seghir - vocals, synths, programming, electric bass, Brigitte Balian - vocals, electric guitar and Catherine Loy - vocals. Following the release of their first album « Just Because » , an English clarinetist, Beverley Jane Crew, joined in. The band released a few albums not easily classifiable, their music has been described as electronic with a twist, new wave, cold wave with undertones of jazz, punk, classical and middle eastern music. The band was active until 1987 and is now considered cult having had records reissued several times and lately as a boxset on Minimal Wave (NY).

Since the early 2000s Philippe Petit has been performing the world, playing festivals all over Europe, Canada, USA, Mexico, Australia & Asia... Feeling lucky to release on several international labels such as Aagoo, Southern UK, Monotype, Alrealon Musique, Beta Lactam Ring, Sub Rosa, HomeNormal, Important, HelloSquare, Public Eyesore, Utech, Staubgold, etc… He is specialising in Modular Synthesis, esp. Buchla + also play various instruments or devices, though most notably an Electric Psalterion + Hackbrett Cymbalum + Caterpillar Drum Guitars built by Yuri Landman + Piano + turntables as well as Theremin. On top of those, he likes to move various glasses, pieces of wood, stones, or percussive objects, as well as taking advantage of vinyl material to fondle released sounds.
Relying on electricity/amplification to produce, manipulate, work on sound-material, but trying his best to explore various genres and make sure that each album differs from the previous one, trying to avoid routine and surprise listeners.

And this is just the beginning because a full album will be out before the end of the year on M-tronic, so stay tuned !